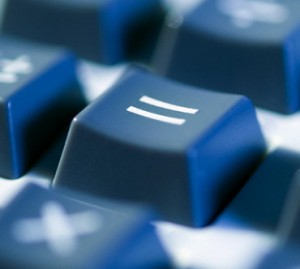 A few weeks ago, I attended a workshop run by Alan November of November Learning and ADVIS (The Association of Delaware Valley Independent Schools).  I was lucky enough to be able to bring two of my 8th grade students to be a part of my learning experience.  We had just gotten back from Canada, so we were all exhausted, but excited to be doing something outside of the classroom together.  Imagine that…learning outside the classroom with students?

Alan whisked off my students and put them to work using a google doc to collaborate with other students to create notes for everyone that attended the conference.  This is what they came up with.  While they were busy being engaged, I was backchanneling the conference on twitter.  I have virtually attended many events and conferences by following live bloggers,tweeters, ustream, and elluminate rooms.  It is amazing what a rich experience you can have sitting in your pajamas while expanding your professional development.  I wanted to give that experience to teachers that could not attend the Alan November conference.  Here is the archive notebook of my tweets from that day.

Right before the morning break, a discussion about mapping conversations and the Harkness table came up.  I am lucky enough to have a Harkness table in my room, so I quickly located an image and tweeted it out: 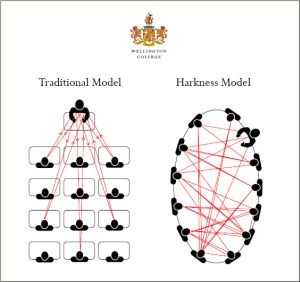 After I did this, I went down to the podium to introduce myself to Alan.  I told him that I was backchanneling the conference, so he had me pull up my twitter account on the larger-than-life screen behind me.  As I was showing him what I was doing, he clicked the last tweet that I had posted about the Harkness table.  What transpired next happened so quickly that I didn’t even really have time to process it.  As I was explaining the difference between learning in a traditional classroom on the left and the Harkness table on the right, he turned to me and said:

Alan: What is your role?

Me:  In the classroom?

Little did I know that those four words were going to change the rest of the course of my day.  Alan told me that he has never in 30 years heard that as a teacher job description.  He told me that I would be presenting for the next ten minutes about Harkness and Twitter…he also wanted to have lunch with me!  Oh my, what had I gotten myself into?  As I was standing at the podium, Alan began talking about the role of a teacher in the classroom in the 21st century.  As I was setting up on his laptop to present, I quick checked my twitter feed and saw this:

When Alan turned the mic over to me, I talked about the Harkness table and twitter…I even combined them to refer to Twitter as a virtual Harkness table.  People who don’t understand twitter think that it is a one way conversation.  Twitter is anything but that.  It is a conversation within your Personal Learning Network (PLN)…your group of educators that you have chosen to be a part of your daily professional development.  I would argue that #edchat is the greatest example of a virtual Harkness table where educators vote on topics and have real time discussions on Tuesdays at noon and seven.  By the end of my conversation, I had new followers on Twitter that were joining in on the conversation as well as people tweeting for the first time.  The twitter feed changed for the rest of the day.  It was active and had now engaged not only the people in the room, but their followers as well.

So…back to that equal thing…

I went back to my seat exhilarated from having the opportunity to present in front of 200+ people, and from being recognized by Alan.  I sat back down and began to process what happened…but the phrase that came out of my mouth kept milling around in my head “I am an equal”.  I was taught during a time period when teachers were the gatekeepers of knowledge.  They were the all knowing, and you were lucky to have their knowledge bestowed upon you.  I can tell you right now that this system did not work for me as a student.  I knew at a very young age that this was not what teaching and learning is all about.  I knew that I would become a teacher and do things differently…so I did.

So what does being an equal mean? To me, it means having an equal role in the classroom.  Sometimes I’m running the show…sometimes they are running the show.  I believe in authentic, student centered learning where students are engaged in the process of learning.  Each student’s process and outcome are different, but they have all been exposed to a balanced curriculum that challenges them to stretch themselves creatively, emotionally, and collaboratively.  If we are truly teaching process, and not focusing on the product, students become equal…they transform themselves from learners to leaders.  They understand that the journey is just as important as the destination…isn’t that what we believe as teachers?   By creating a classroom culture where the foundation is mutual respect, responsibility, and equality, both students and teachers become truly engaged in the process of teaching and learning.  It becomes a dynamic and vibrant place to be…a place where students want to learn and grow, and a place where teachers are inspired to learn and grow.  It is a place where I am an equal…a place where we are all teachers, learners, and leaders.

8 thoughts on “New teacher job description: “I am an equal.””