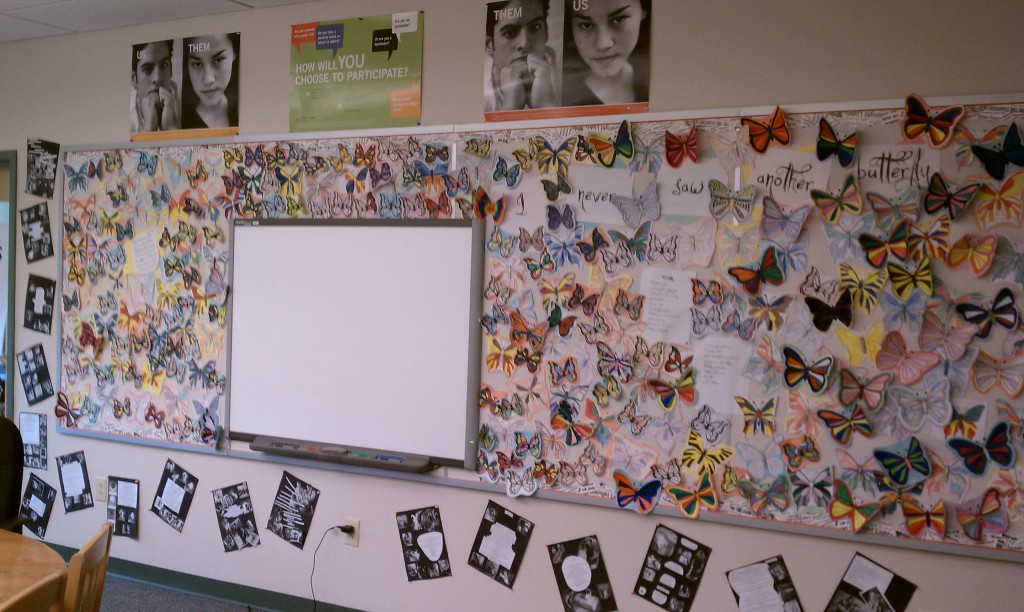 A few weeks ago, I received an email from Teaching Tolerance with a subject line that read:  What’s on your wall?  I opened it and read the following:

Every classroom has a personality. You can often see it just by walking in. The doorway, walls, and bulletin boards are all decorated to let students know the teacher cares.

Many educators work hard to create that just-right presentation. They know decorating classrooms is an art form. We know it, too. That’s why we’d like to recognize the teachers who do it well. We’re planning to show some of the best classroom decorations in the 20th anniversary issue of Teaching Tolerance magazine, coming out this fall.

I didn’t even have to think twice about this.  I immediately went to the butterfly “wall of hope” in my mind.  For the past three years, I have been teaching Holocaust Studies to 7th graders in order to incorporate tolerance and acceptance into the curriculum.  Through literature, short stories, film, and multimedia, my students explore the essential question of:  What is Right?  throughout the year.   In order to teach remembrance and memorial, I use the film Paperclips (2004) to show how a group of students not only learned about the Holocaust, but also created a memorial that would change their lives as well as the lives of the people in their small, rural community.

After watching Paperclips, I read “I Never Saw Another Butterfly”, written in 1942 by Pavel Friedman.

The last, the very last,
So richly, brightly, dazzlingly yellow.
Perhaps if the sun’s tears would sing
against a white stone. . . .

Such, such a yellow
Is carried lightly ‘way up high.
It went away I’m sure because it wished to
kiss the world good-bye.

For seven weeks I’ve lived in here,
Penned up inside this ghetto.
But I have found what I love here.
The dandelions call to me
And the white chestnut branches in the court.
Only I never saw another butterfly.

That butterfly was the last one.
Butterflies don’t live in here,
in the ghetto. 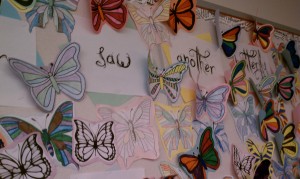 After discussing the film and the poem, my students decided they would like to take the symbol of a butterfly to represent hope for the 100 surviving children in the Terezin Concentration Camp.  That year, they created 100 butterflies and put them on my wall to represent hope, tolerance, and remembrance.  The following year’s students continued to add to it to create a wall of hope using the symbolic butterfly.  Again, this year’s class wanted to add to it.  I don’t know how many there will be, but it has become an integral part of my room.  Often, people who just see it think it is a pretty display, but one of my students will be quick to explain the true meaning behind the hope and remembrance.  My students are taught to be upstanders through tolerance and acceptance, and this wall is representative of just that. 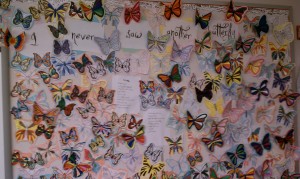